Genders in McLaren Vale was the first to plant Cabernet Sauvignon and the third to start cellar bottling in the 1960's. Today, its a one-woman show, with Diana Genders running both the vineyard and the winery. Releases are cellared for 5 or 6 years prior to release, in order to show the traditional regional cellaring style at its best. High quality and tradition all the way.

Only released when the very experienced, Di Genders thinks they are ready to drink, hence drinking 1999 in 2012. Very good colour with dark berry, mineral, liquorice aromas leading to a full bodied ripe and fleshy soft tannin palate filled with dark plum and blackberry fruit running to leather, truffle and earth flavours on the finish.
1999 - 94
2000 - 90
2001 - 92
2005 - 94

Roast fennell with aniseed and chicory, some peaty soot with that type of red seaweed - Chondrus crispus - that the Irish jokingly call moss and use for clearing chest colds, blackberry leaf ... after a patient week nudging this braw laddie, these are indicators of the wine being Cabernet.
Below all that decor, the fruits, a compote of all sorts of red and black things glower upwards, gazing through the murk like the eyes of ancient pike. I'll thank Ted Hughes for that image. Diana Genders, come to think of it, is the only vigneron in the Vales as elusive as Pike, the mythologised hermit of Marius, and perhaps the only soul in the joint who makes wine as determinedly individualistic and outstanding of quality.

But I'm wandering ratbrained now. It's the wine. This is a massive, impenetrable, hewn menhir of a drink which I don't reckon many would have picked as a Cabernet upon opening and even fewer would have recognised as the sort of classic McLaren Vale tincture we'd drink in the 'seventies.
Although Cabernet was a rarity in these parts back then. When the teenaged Duncan Genders, brother, planted these vines in 1967, he found it very difficult to find cuttings. Nearly fifty years ago. That's the sort of timeframe I reckon all Diana's wines can claim. They will live for such great stretches of time that in these infant days the best lesson they can teach can be learned ideally by those who'll spend their $55 and ponder a glass each day until you hit that mad rushy peak like I'm hitting now.

"I live to make 'seventies wine," Diana Genders said a week ago. "I just don't do micro-ox or those things. I'm here to wait. Like we used to do."

We were in her comfy tasting-by-appointment only winery on McLaren Flat, drinking her best vintages from the last fifteen years. The oldest, the 2000 Cabernet was just beginning to awaken. Now I'm startled to realise that like that wine, I've had this new release Shiraz Grenache opened all that time, and it's showing signs of stirring, too.

A week back, this was so brutally reclusive it scared me. It reminded me of 'seventies Penfolds reds, tight and compressed within their surly sappy carapace, sometimes softened a little like this, with some Grenache.

Now it's a rich, smoky, surly stew of a thing, a welling wallow of blackberry, mulberry, dried fig and prune with a prickly aniseed/fennel edge. It's syrupy of texture, and almost seductive, but then the reinforcements arrive: the acid and tannin footsoldiers rock in to warn you that this is not gonna be a walkover.

It does indeed remind me too, eventually, of the rich, staunch wines Diana's Dad Keith made in that same little building when I was still in pimples.

I reckon Diana's wines are cleaner and more precise, which serves only to make them more gradual about getting around to your actual glowing. As she said, she's not into deliberate oxidation as has been the fashion for years, softening wines with the vinous equivalent of the fish tank bubbler.

This very seriously is a trip into the past. I wonder if I drink a case will I get my yoof back?

In April 2013 Diana Genders  had a special visitor of Philip White. Philip writes for a local publication "Indaily" and blog site "Drinkster". Whilst Philip was at Genders he did us the honour of rating our 2005 Shiraz at 95+++ points. 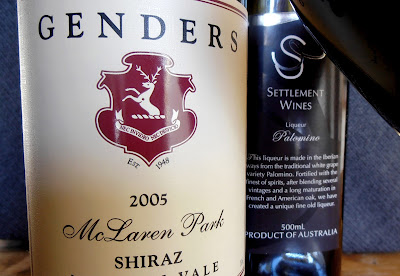 Made from thirteen rows of a 1991 planting of an unknown clone of Shiraz in the tiny -- 1.1 ha.-- North Block below Chalk Hill, this wine comes from the geographical heart of McLaren Vale, and yet bears little, if any, resemblance to its rivals, whether they're from tiny or vast wineries. Most 2005 Vales Shiraz is dying now; this baby's hardly talking. It's probably the best 2005 Vales red I've seen. The wine is certainly built for the long haul: it's as tight and precise as a kettle drum, showing no fat or jam or gloop whatsoever. Thirty months of French oak has given it a splinter of walnut forest, but this gradually subsides as the wine ever so begrudgingly takes in air. It immediately reminds me of the wines August Clape and family makes from the Cornas vineyard on the edge of the Rhone, but it's tighter than those, as if it were grown in a much cooler climate. Appropriately, it seems coolly distant at first, but gradually releases alluring insinuations of this or that: licorice, musk, cosmetics, mudcake, confectioner's sugar, summer dust … primary fruit is the last thing on its mind. Eventually, like after 24 hours, you'll see reluctant oozes of baby beetroot -- borscht with sour cream, really -- and gentle, silky mulberry and prune emergent. The palate is lean and compressed, and yet near-prefect in its formation and shape: it just seems to draw out so long and tapering and slender it's like a gastronomic sabre being withdrawn from its sheath. The texture is very faintly grainy: a vinous Teflon. It has tremendous natural acidity. It will last for decades -- four? five? -- in the cellar, and needs a good twelve hours in a jug to be best loved in this its infancy. He was crossing varietal boundaries, of course, but I understand what one USA critic meant when he said Genders was the Petrus of Australia, before he took half a vintage of this home with him, for sale at a vast profit. (Château Petrus is currently around $2700 per bottle.)